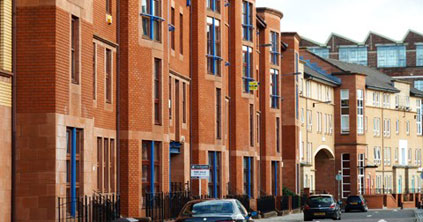 Organised by Miles Glendinning (University of Edinburgh) and Florian Urban (Mackintosh School of Architecture), in partnership with the Mackintosh School of Architecture and DOCOMOMO-International, and with support from the Architectural Heritage Society of Scotland (AHSS) and the Scottish Centre for Conservation Studies (University of Edinburgh), the conference will examine the re-emergence of the tenement as an urban building form.

The tenement has been ‚reinvented‘ all over Europe since the 1970s. The conference will focus on the renaissance of this widespread and, until recently, very controversial housing type, which for the purpose of this conference will be defined as dense flatted residences on a street block plan. Tenements are particularly prominent in Scottish cities and have been a symbolic battleground in the long-running confrontation of ‚history‘ and ‚modernity‘ in the built environment. There, and in many other European countries, nineteenth-century tenements inspired a variety of new buildings that adapted features such as perimeter block plans, variations of small-scale design, multifunctional spaces, and regional aesthetics to contemporary uses and preferences – in the process synthesising elements of ‚tradition‘ and ‚modernity.‘

While the New Tenement is now widely accepted as a desirable dwelling-type, the new vision of the city and its inhabitants is subject of on-going debates. This includes questions of difference and local identity as well as ideas about individual responsibility and the role of the state. Against this background, the conference will contextualize the international ‚tenement renaissance‘ since the 1970s and its continuation today.

In his lecture „The Making of a Socially Sustainable Town“ Christoph Kohl will talk about his experiences on ’new tenement‘ designs (click here for the Conference Programme).

International committee for the documentation and conservation of buildings, sites and neighbourhoods of the modern movement / do_co.mo_mo__ISC:U+L:
E-proceedings 5 „THE NEW TENEMENT CONFERENCE – Glasgow School of Art, 10 May 2013“.