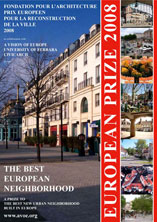 The best urban neighbourhood built in Europe in the last 25 years.

The project Brandevoort, Helmond (The Netherlands) was nominated for Philippe Rotthier European Architecture Award 2008. The European Prize for the Reconstruction of the City was awarded in June 2008.
An international exhibition presented by Fondation Philippe Rotthier, Fondation Pour l’Architecture, A Vision of Europe, and Civicarch has been organized at the Foundation for the Architecture in Bruxelles by 2008, October 18 to December 14.